Hotel Information for the 2020 Atlantic city national will be posted soon. 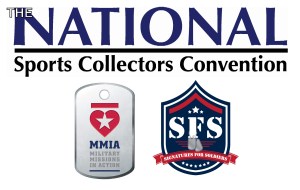 Chicago, IL (Tuesday, June 22, 2021) – The National Sports Collectors Convention (National), the annual premier showcase event of the multi-billion dollar collectible industry, announced they are teaming with Military Missions In Action (MMIA), a 501(c)3, via Signatures for Soldiers, dedicated to assisting Veterans with disabilities, members of the Armed Forces, and their families.

“We are extremely excited the 41st National Sports Collectors Convention is partnering with Military Missions In Action (MMIA) to benefit military veterans and their families,” said John Broggi, National Show Promoter. “In addition, Signatures For Soldiers fundraising campaign enables our exhibitors and show attendees to show their support and appreciation for the men and women who have served and sacrificed for our country.”

The National will support Military Missions In Action campaign to raise funds, via their Signatures For Soldiers fundraising campaign, that assist disabled military veterans and disabled children of active duty military personnel, providing on-site exhibitor space thanks to an on-line auction, powered by Handbid, with 100% of the proceeds benefiting Military Missions in Action.

“We are incredibly grateful to the National Sports Collectors Convention for conducting an on-line auction, powered by Handbid, with 100% of the proceeds benefiting MMIA/Signatures For Soldiers,” says, Tim Virgilio, Military Missions In Action Advisory Board Member and Signatures For Soldiers founder.

Open to the public, the Donald E Stephens Convention Center will be transformed into a collector’s paradise utilizing 400,000 plus square feet, including 650 high profile exhibitors from around the country who are buying, selling and trading sought after sports/entertainment collectibles and memorabilia.  The National’s Tristar Autograph Pavilion will feature 125 plus superstar athletes / entertainers signing and taking photo-ops with sports fans and collectors alike throughout the week.

“We look forward to continuing Tristar’s ongoing relationship with Signatures for Soldiers and Tim’s great efforts to support military veterans,” said Jeffrey Rosenberg, CEO of Tristar Productions.  “Our Tristar Autograph Pavilion team, at the National, looks forward to joining the National in supporting the military veteran and families.”

The National advance VIP packages and general admission tickets are on-sale via www.nsccshow.com.  The initial, star-studded lineup of stars appearing in the Tristar Autograph Pavilion has been announced with advance autograph tickets now on sale at www.tristarproductions.com.

Want to stay informed about The National?

Don't be left in the dark. Enter your email address below and stay
in the know with news, announcements and more from
The National Sports Collectors Convention!